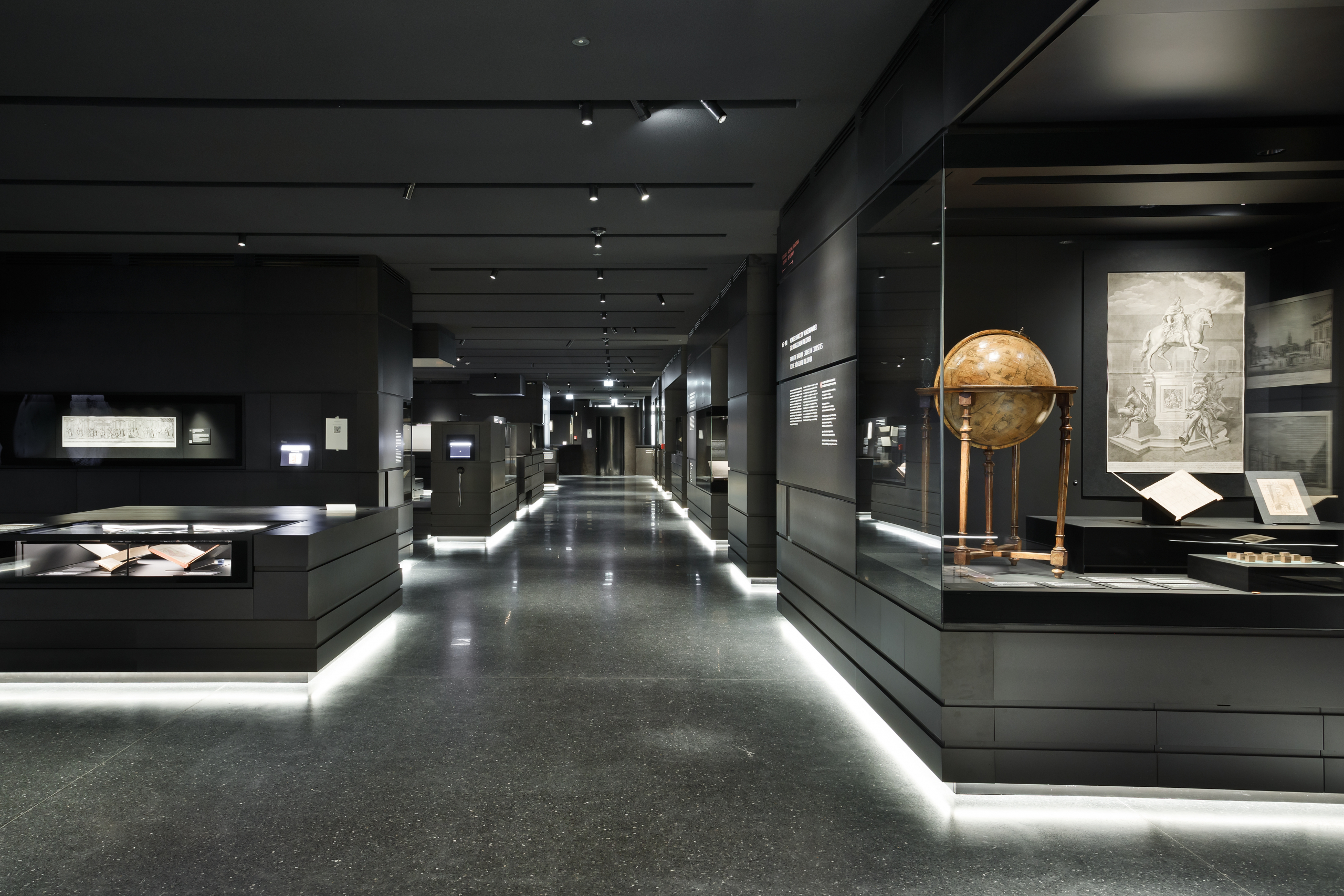 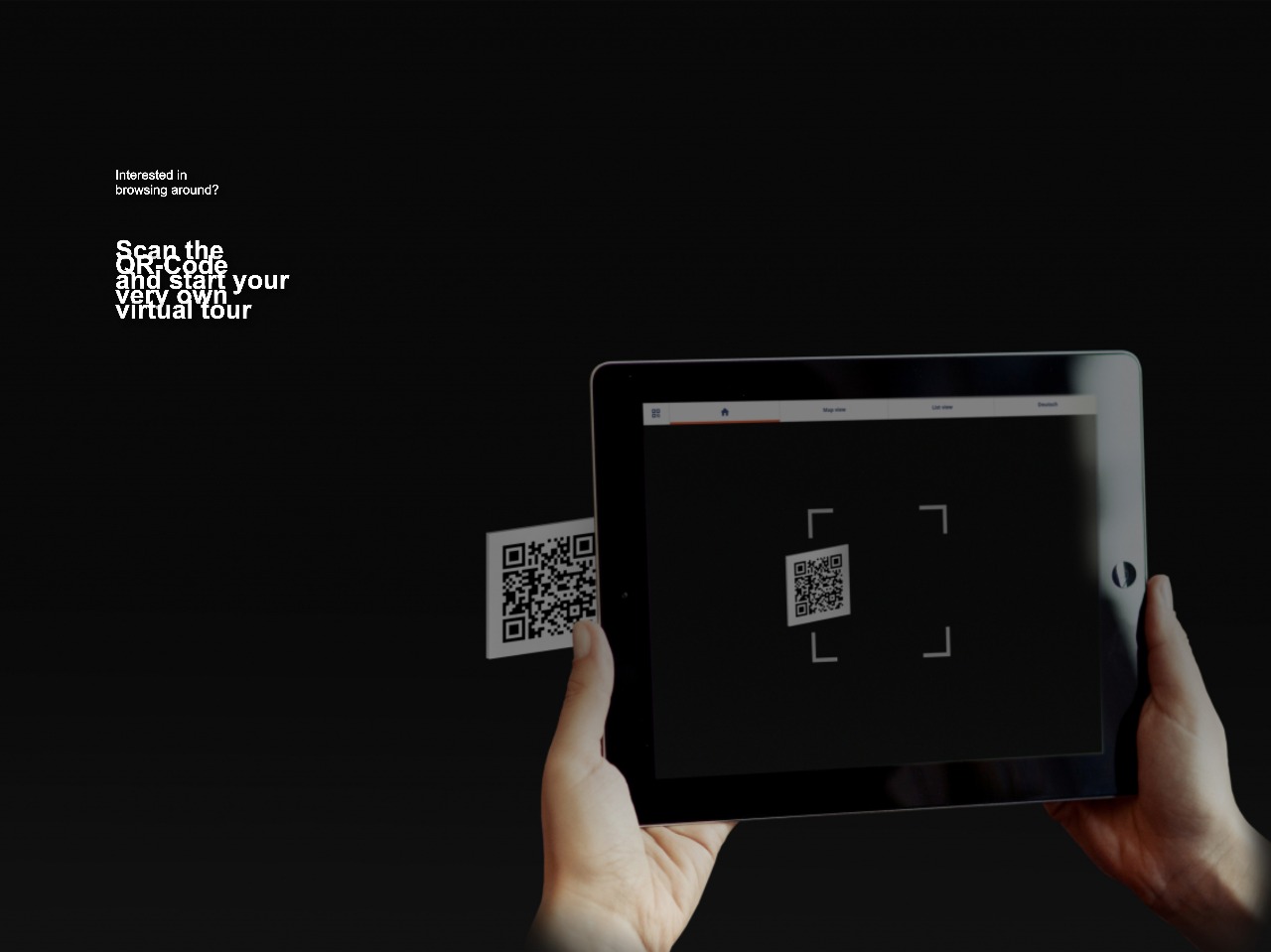 Welcome to the virtual tour of the exhibition space at the Staatsbibliothek zu Berlin! Around 300 exhibits from the Staatsbibliothek are on display, including precious objects such as the Mass in B minor by Johann Sebastian Bach and the Gutenberg Bible. Our digital guide will offer you a selection of topics and exhibits with detailed information. You can either be guided virtually through the exhibition on the spot or enjoy the virtual tour from the comfort of your home. Many of our manuscripts and books on display can be fully viewed and read in our digital collections using the links and QR codes provided by the museum.

Your Visit to the Stabi Kulturwerk

How to get here

Overview of the exhibition sections

When in 1661 the Churfürstliche Bibliothek was opened in the apothecary wing of the Berlin Palace, the most important private book collection of Electoral Brandenburg became publicly accessible in a baroque cabinet of curiosities. It was presented to a – however limited –learned audience from higher ranks in society. Since 1701 referred to as Königliche Bibliothek, the library always depended on the interests and benevolence of the respective ruler. Thus the founder of the library, Friedrich Wilhelm,the Great Elector (1620–1688), established a universal collection of considerable non-European holdings. In the 18th century, when science and culture prospered in the Prussia of Friedrich II., the Great (1712–1786), ‘his’ library as well benefitted from this development: for the first time, a separate building was constructed for the library. 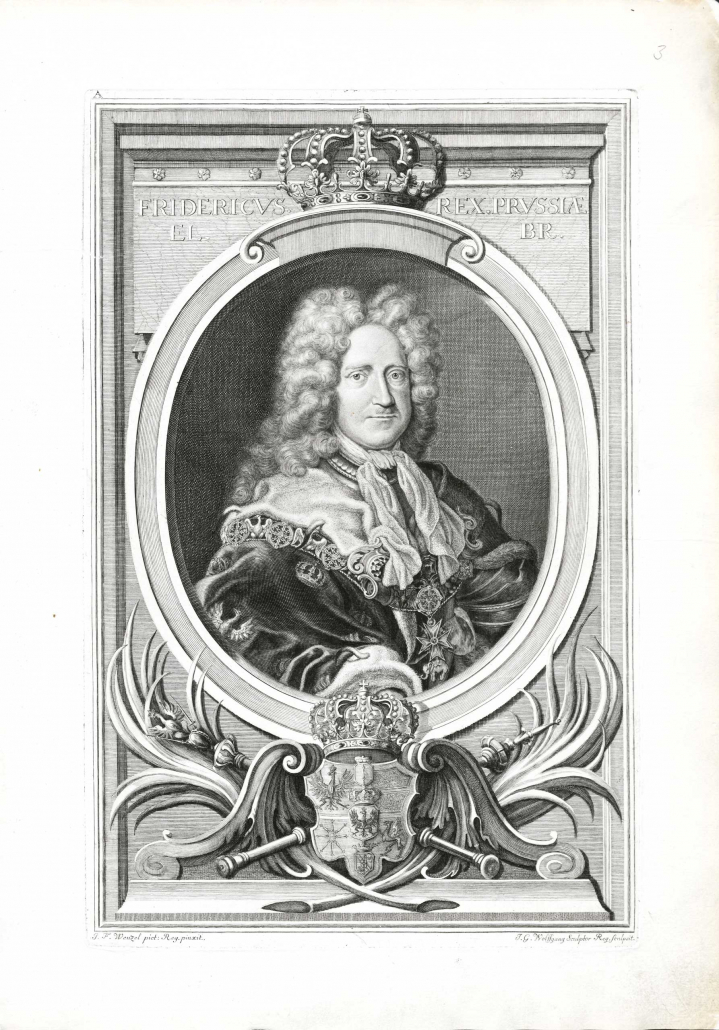 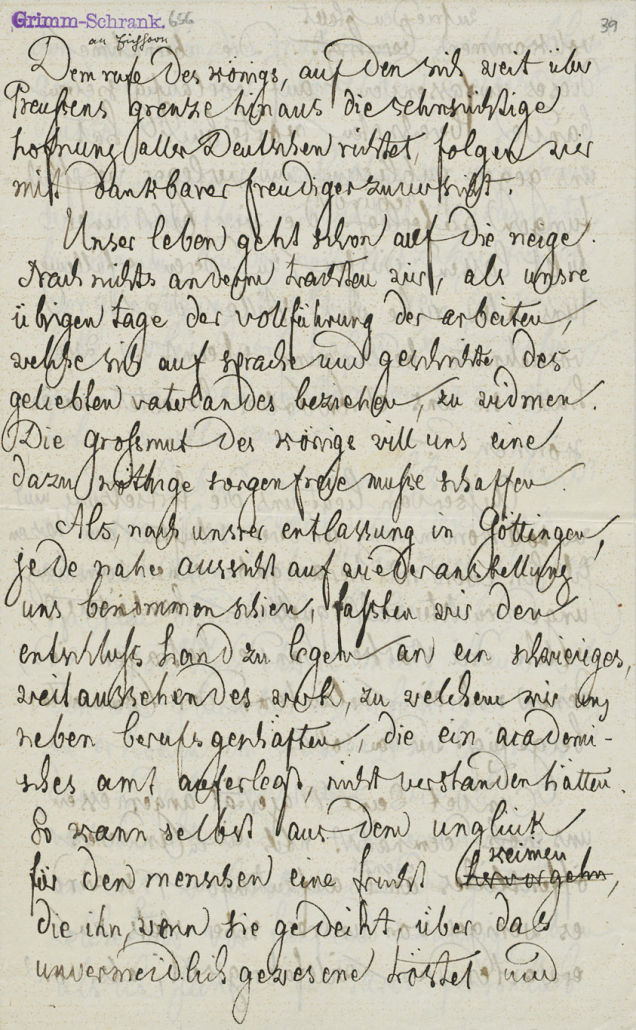 At the beginning of the 19th century, parlour culture was a new phenomenon in Berlin. The parlours offered a possibilty to exchange ideas on intellectual and scientific topics, especially in the field of literature and music. The milieu was no longer feudal but bourgeois. The princely library became an important institution for science and research with a close relationship with the newly founded university in Berlin and other institutions, whose collections were well catalogued according to scientific standards. Important researchers, such as the Brothers Humboldt and the Brothers Grimm, Georg Wilhelm Friedrich Hegel, Theodor Mommsen and Leopold von Ranke, lived and worked in Berlin.

In the period of the German Empire (1871–1914) the Königliche Bibliothek reached the peak of its development. It was planned to dynamically develop the library and make it a ‘Reichsbibliothek’, the most important institution of its kind in Germany. Large and remarkable collections were either purchased or came to the library thanks to the support of patrons. Print holdings were greatly expanded, also in hitherto rather neglected subjects such as engineering and natural sciences. Numerous cross-regional projects were initiated. In 1914, the Emperor inaugurated an impressive new library building.

The extensive collections of the institution, called Preußische Staatsbibliothek since 1918, reflect World War I as well as avant-garde currents of the Weimar Republic. During National Socialism, the library was the scene of anti-Jewish actions of the Nazi State and during World War II the library reached the lowest point in its history, due to evacuations and destruction. 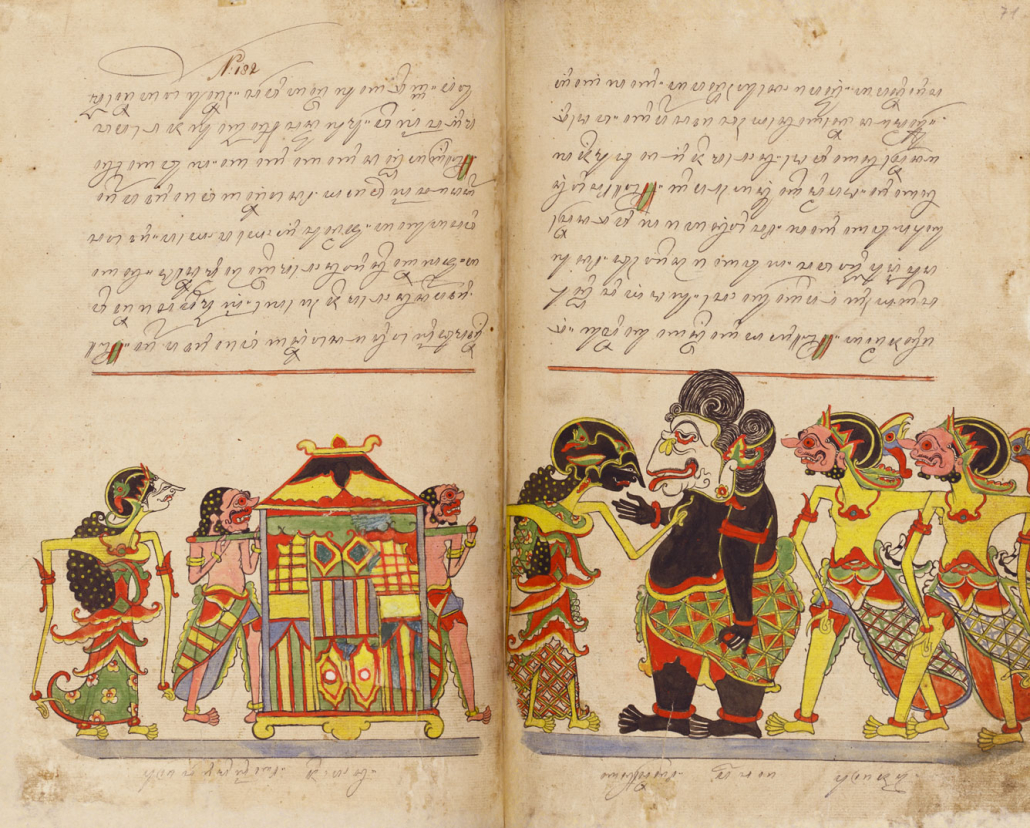 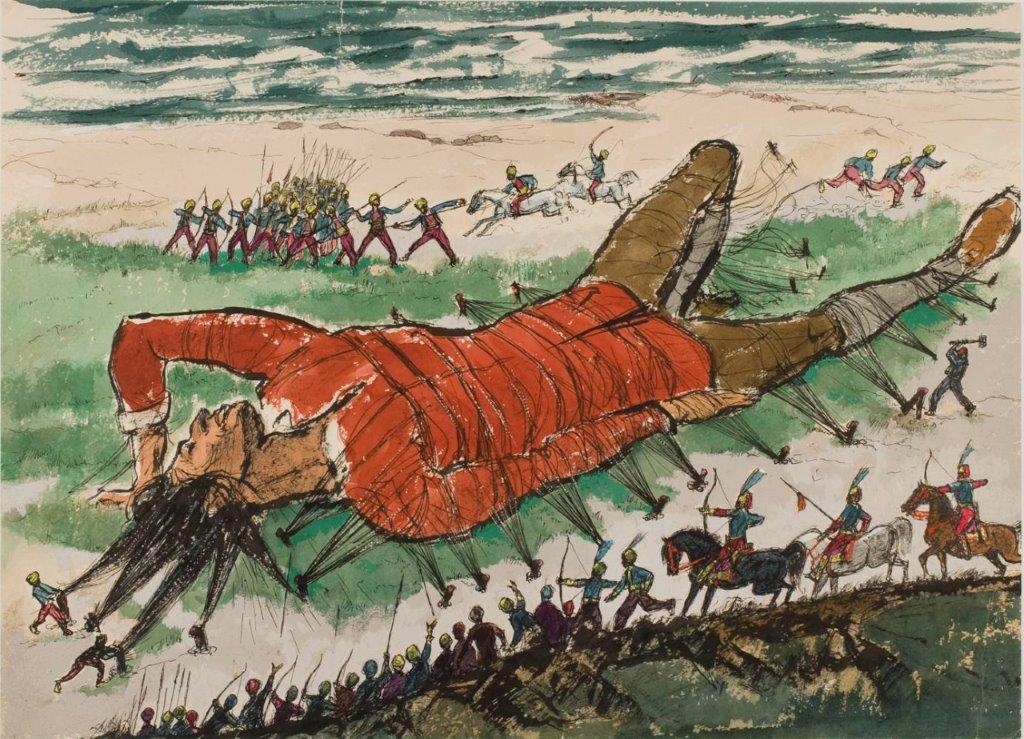 After 1945 the Division of Germany and the Cold War influenced the library like hardly any other institution of its kind. As a result two libraries developed: the one in the Federal Republic was initially called Hessische Bibliothek, then Westdeutsche Bibliothek and was located in Marburg. Since 1962 this library, called Staatsbibliothek, has been a member institution of the Stiftung Preußischer Kulturbesitz and it moved into a spectacular new building in Berlin (West). The library in the GDR, located in Berlin (East), was first called Öffentliche Wissenschaftliche Bibliothek, until in 1954 it was renamed Deutsche Staatsbibliothek. In 1992, the two state libraries were merged into one library called Staatsbibliothek zu Berlin – Preußischer Kulturbesitz. The creation of new special departements and the collections of both institutions reflect the different political developments in this period.

The Staatsbibliothek
in the Present and in the Future

The Staatsbibliothek zu Berlin – Preußischer Kulturbesitz ranks among the most important libraries in the world and is a centre of national and international literature provision. Alongside the acquisition of current printed and electronic materials, the historical collections are constantly expanded. The library’s profile focuses on the humanities, cultural and social sciences as well as on the collection foci and special information services funded by the Deutsche Forschungsgemeinschaft (German Research Foundation). Being a member of the Arbeitsgemeinschaft Sammlung Deutscher Drucke, the Staatsbibliothek is responsible for tasks of a national library. By developing its services, the library promotes the worldwide use of its services and offers. It is systematically expanding user and information services both on site and online. Via digital networks the library provides to everyone interested access to knowledge relevant to research and cultural heritage. 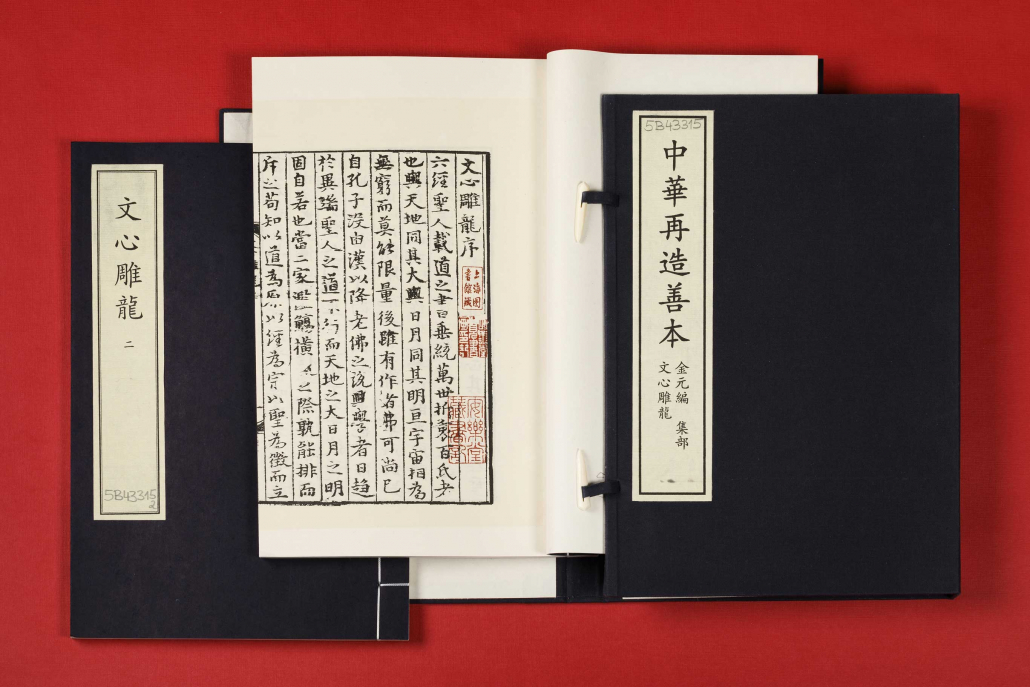