Globes from Berlin
in the 19th century

The production of globes in Berlin was influenced by three traditions:
The first tradition is from the end of the 18th century. The toy shop businessman Ludwig Friedrich Catel created the first globe and sold small-formatted globes which were presumably produced in Nuremburg. The publisher Schropp as well as the big globe production companies of the second half of the 19th century sold small globes to the same group of customers. The smallest globes were made for dollhouses with a diameter of 2.5 centimetres.

The third tradition is making geographical globes like the ones you see here. Production began with the collaboration of Berlin scientists, such as Daniel Friedrich Sotzmann and Johann Elert Bode, with the publisher Johann Georg Franz in Nuremburg, who owned a company for producing globes in the traditional style.

At the beginning of the 19th century, the globes of Christian Gottlieb Riedig went into production at the publishing company Schropp. In the end, due to the efforts of such important publishers like Dietrich Reimer, Ernst Schotte, and Julius Heymann, Berlin was turned into an international centre for globe production.

These geographical globes also came with an instruction manual on how to use globes  like the one from Carl Brandan Mollweide, which was published via Simon Schropp & Comp. in 1826. (SLUB Dresden)

Example of other globes 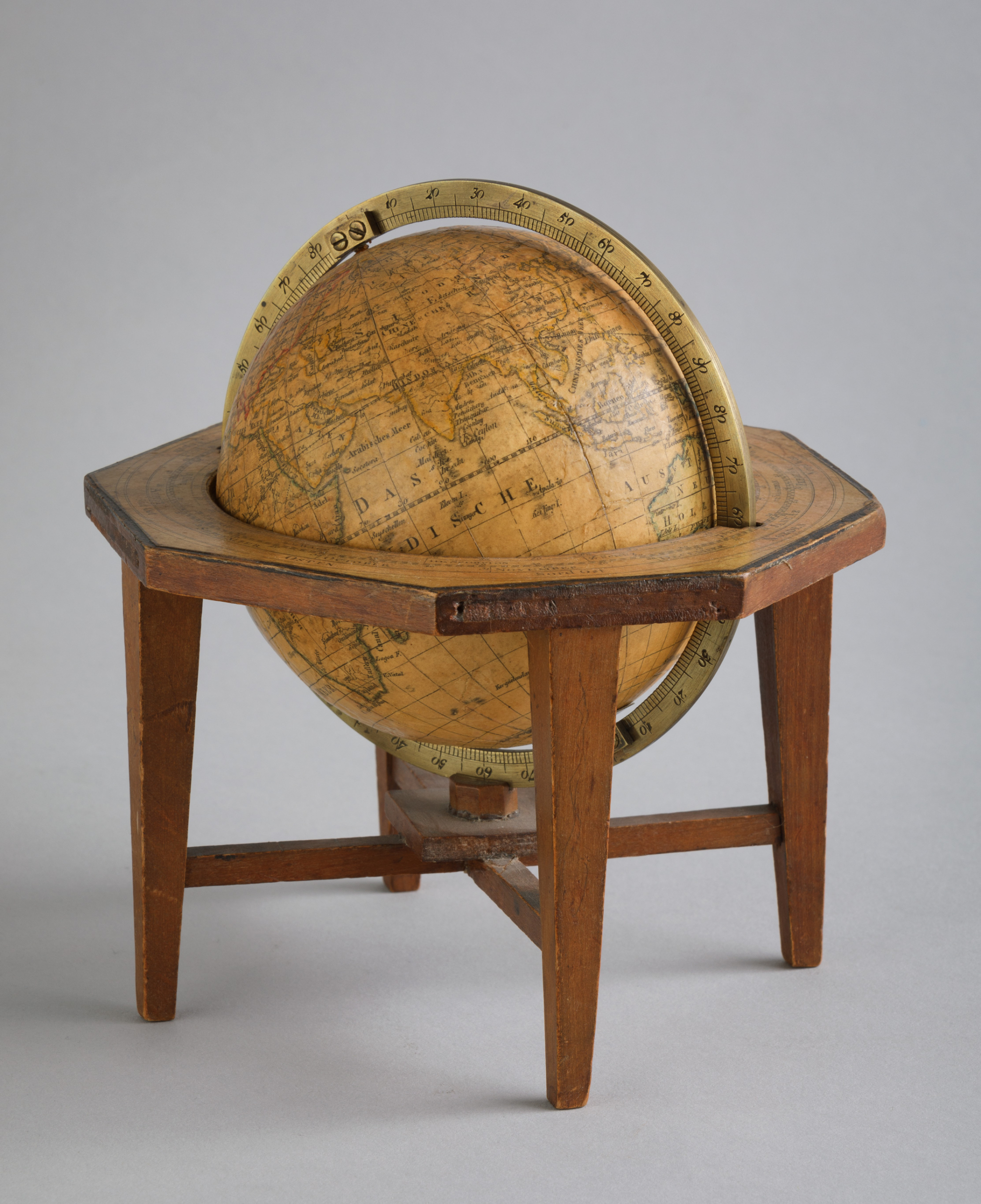 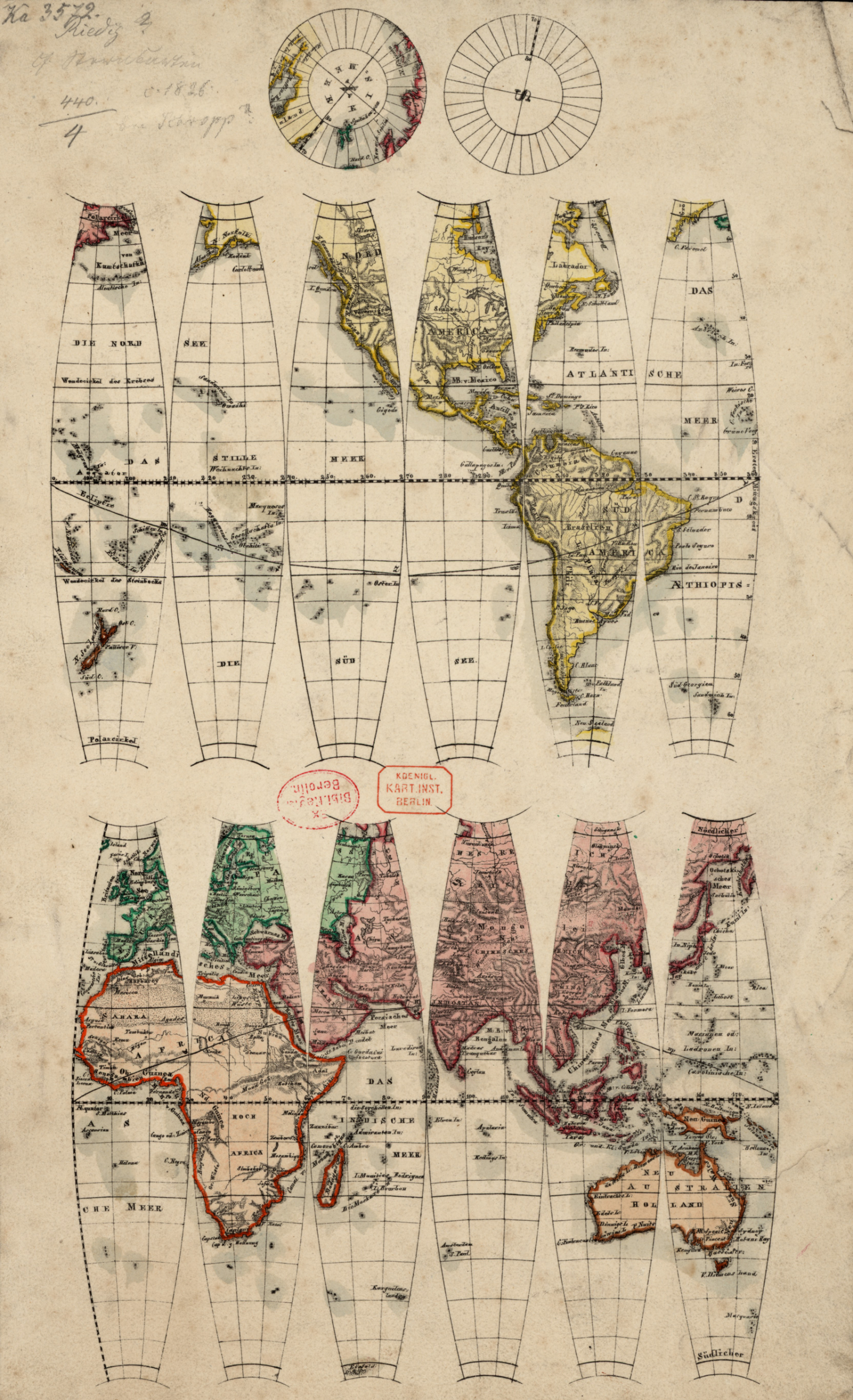 The gores of the terrestrial globe, 11 centimetres in diameter, from the publisher Schropp. SBB-PK. Public Domain Mark 1.0

The gores of the celestial globe, 19 centimetres in diameter, from the publisher Schropp by Christian Gottlieb Riedig. SBB-PK. Public Domain Mark 1.0

Globes in the directory of the publishing house Schropp, 1846. SBB-PK. Public Domain Mark 1.0

An example of the various functions
of old globes

From the 16th century onwards, terrestrial and celestial globes were usually fixed in a case which was surrounded by rings. These rings showed different scales of information which you could use to make astronomical calculations and give demonstrations. The brass ring which runs from north to south around the globe is the meridian (1). The meridian ring is used to determine the geographical latitude by placing the location on the globe directly under the meridian ring. The horizon made of wood (2), surrounding the globe like a small table, has been divided into degrees which show the lines of longitude. Then, there is the calendar and the twelve signs of the zodiac which can help determine the path of the sun. With the help of the zodiac signs, you can now gain information about the position of the sun. On the globe you can see the lines of latitude and longitude, the ecliptic (3), and a clock face with two numeral systems on top of the north pole. With these components, it was possible to determine either where the sun currently was in the zenith or the time of the sunrise and/or sunset in a particular place (as demonstrated in our film). 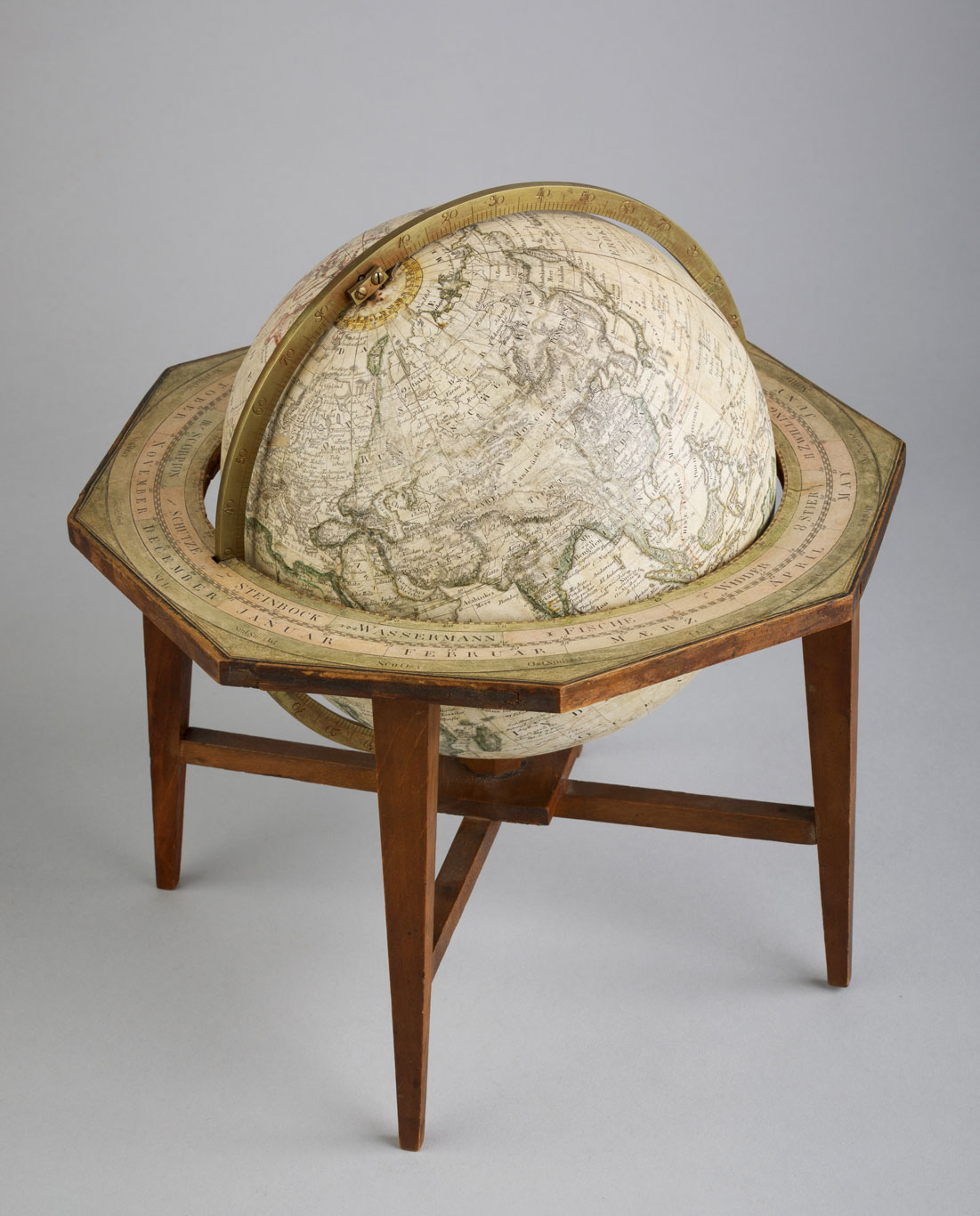 dial in a 24-hour format